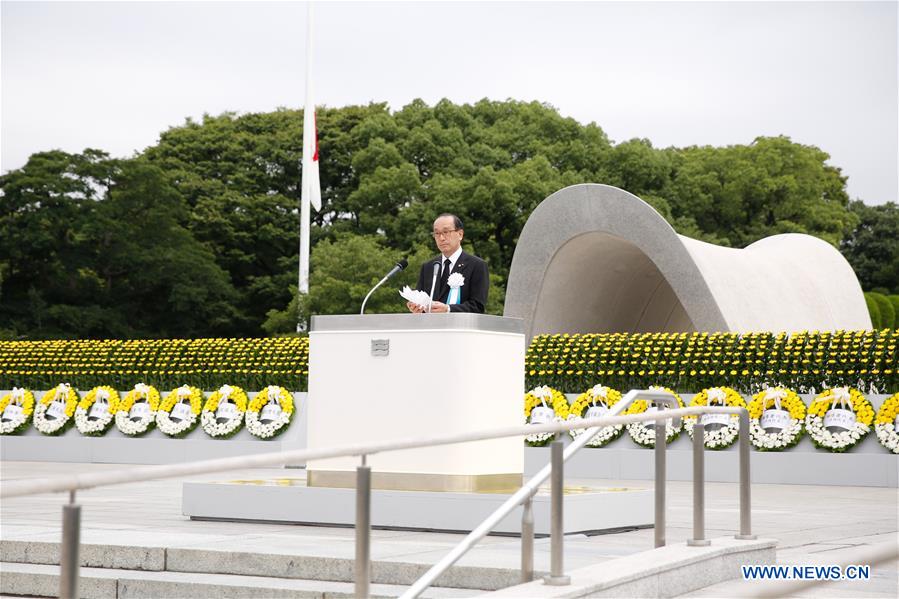 Japan marked the 75th anniversary of the atomic bombing of Hiroshima on Thursday, with its mayor urging the world to unite against threats to humanity including those from nuclear weapons.

Hiroshima Mayor Kazumi Matsui said countries should "put aside their differences and come together to overcome both man-made and natural challenges."

"Civil society must reject self-centered nationalism and unite against all threats," Matsui said at the annual ceremony at Peace Memorial Park.

The memorial ceremony was scaled down due to a resurgence of COVID-19 infections in Japan and the need to maintain social distancing.

A moment's silence was observed by those in attendance, including Japanese Prime Minister Shinzo Abe, at 8:15 a.m. local time, the time when the "Little Boy" uranium-core atomic bomb dropped by a U.S. bomber exploded above Hiroshima on Aug. 6, 1945.

Despite Japan not being a signatory to the Treaty on the Prohibition of Nuclear Weapons, Abe, in his speech, said countries must not let nations' different stances on nuclear weapons widen further.

"Each country must step up efforts to remove a sense of mistrust through mutual involvement and dialogue amid the severe security environment and widening differences between nations' positions on nuclear disarmament," the Japanese premiere said.

The number of survivors of the two atomic bombings including Nagasaki known as hibakusha with an average age of 83.31, have dropped by 9,200 from a year earlier to 136,682 as of March, according to the Ministry of Health, Labor and Welfare.

While Japan commemorates the tragedies it had experienced at the end of World War II, historians and political minds of the international community have encouraged Japan to come to see themselves not as merely victims of the atomic bombings but also as the perpetrators who led to these tragic incidents to happen in the first place.

Japan brutally occupied many parts of Asia before and during World War II, causing untold suffering and deaths to hundreds of thousands of innocent victims.